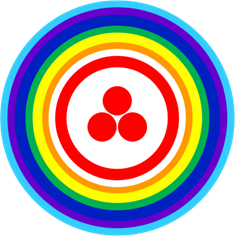 Our logo, based around the banner of peace of the Roerich Pact, is a symbolical and literal depiction of our intention to protect the culture of the school, honor freedom in learning, respect children and their rights, and appreciate the myriad forms of human diversity. Of symbolical importance are three basic elements: (a) the circles; (b) the colors; and (c) the banner of peace with its particular arrangement of circles and color.

The circle is one of the oldest symbols known to humanity and arguably the most universal. As a symbol its meaning differs according to context, be it psychological, cultural, or religious. Meanings of the circle relevant to our logo include: the Self (Edinger, 1992), the school, and life. The Self referred to is the archetypal Self descriptive of psychological wholeness, completion, allowance, and acceptance.

The school itself is symbolized by the circle as well, since the school is the container, the safe space through which freedom of expression is undertaken by the community of the school. Analytical psychology refers to this notion of a container as the temenos, which can be interpreted as “sacred space”. Such a container is necessary for the unconscious to be freely expressed through any chosen medium, such as conversation, art, poetry, music, dance, science, experimentation, or invention.

The circle represents life because there is a beginning, middle, and end to all forms of experience. This is this case with Boulder Sudbury as well. Generations come, and generations go, while the legacy of the school, co-created by all those who have passed through its halls, will continue on. This is the circle of life at the school, which mirrors the circle of life found in nature, in society, and in our individual lives.

The colors can be viewed individually or collectively as a seven-fold rainbow. Either individually or together, the colors represent the persona of the community of the school and the individuals therein. They represent, in general form, the varieties of experience, the qualities of being, and an overarching synthesis. Jung (1970) compared the rainbow with the tail of a peacock when he stated that “the exquisite display of colors in the peacock’s fan heralds the imminent synthesis of all qualities and elements (p. 290) and that “the synthesis of the four or seven colors would mean nothing less than the integration of the personality” (p. 287). Again we have this notion of wholeness in the psyche, although in specific relation to the personality here. The rainbow also symbolizes a universal bridging principle as found in multitudes of the world’s cultural myths, such as the old Norse concept of the Bifrost, and has more recently been presented as bridging art and science from antiquity to the present (Lee & Fraser, 2001).

As for the banner of peace itself, we could not be more pleased than to have this banner in the core of our logo. In one respect, this very banner adds a layer of safety and protection to the school such that the temenos is reinforced, and thereby the culture and all activity occurring in the school is supported from the outside-in through the Roerich Pact and from the inside-out through the school meeting. As stated by the Roerich Museum (2015):

The Pact itself declared the necessity for protection of the cultural product and activity of the world—both during war and peace—and prescribed the method by which all sites of cultural value would be declared neutral and protected, just as the Red Cross does with hospitals. Indeed, the Roerich Pact was often called The Red Cross of Culture.

Just as the Red Cross is embodied in a protective sign and banner, so does the Roerich Pact also designate a symbol—the one seen on this page—to be displayed on a banner, The Banner of Peace. This Banner, flown at all sites of cultural activity and historical value, [as well as educational institutions], would declare them neutral….

In this way, all nations that have signed this Roerich Pact must do no harm to those bearing this banner of peace. This is active during times of war and peace, and applies to nations with respect to treatment of their own centers of culture and education.

The symbolism of the banner of peace has been interpreted in several ways, but Roerich himself described the three inner circles as representing the totality of culture in the form of art, science, and religion, as well as the eternity of time (Roerich Museum, 2015). The eternity of time includes the past, present, and future, which is indicative of the importance of culture and the respect it deserves for all time. The three circles then, provide an adequate means of conveying what it is within culture that is important enough to merit a form of protection mandated by law.

The above describes the literal importance of the banner of peace, however there is also a more subjective importance in Roerich specifically choosing three circles. As stated above, the circle may be considered a primordial symbol and its ancient significance remains undisputed. The symbol containing three circles together is also ancient, bearing a universality akin to that of the circle itself. Roerich found the importance of this symbol in most religions and in this way it was believed to have sacred origins, which may have influenced his belief that the symbol represented a deep understanding of the triune nature of all existence (Roerich Museum, 2015).

In summary then, our logo symbolizes the protection of culture and all those who are a part of the culture of the school, such that integration of the personality may be possible through a synthesis of experience, thereby bridging all aspects of being and fields of endeavor. This fulfills the bio-psycho-social imperative for wholeness. 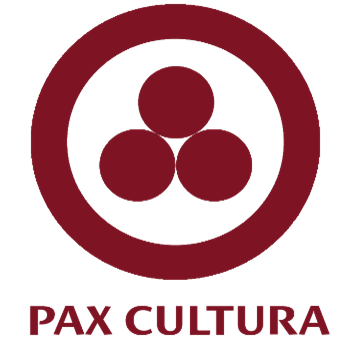 PROTECTION OF ARTISTIC
AND SCIENTIFIC INSTITUTIONS
AND HISTORIC MONUMENTS

The High Contracting Parties, animated by the purpose of giving conventional form to the postulates of the Resolution approved on December 16, 1933, by all the States represented at the Seventh International Conference of American States, held at Montevideo, which recommended to “the Governments of America which have not yet done so that they sign the ‘Roerich Pact’, initiated by the Roerich Museum in the United States, and which has as its object, the universal adoption of a flag, already designed and generally known, in order thereby to preserve in any time of danger all nationally and privately owned immovable monuments which form the cultural treasure of peoples”, have resolved to conclude a treaty with that end in view, and to the effect that the treasures of culture be respected and protected in time of war and in peace, have agree upon the following articles:

The neutrality of, and protection and respect due to, the monuments and institutions mentioned in the preceding article, shall be recognized in the entire expanse of territories subject to the sovereignty of each of the signatory and acceding States, without any discrimination as to the State allegiance of said monuments and institutions. The respective Governments agree to adopt the measures of internal legislation necessary to insure said protection and respect.

In order to identify the monuments and institutions mentioned in article I, use may be made of a distinctive flag (red circle with a triple red sphere in the circle on a white background) in accordance with the model attached to this treaty.

The signatory Governments and those which accede to this treaty, shall send to the Pan American Union, at the time of signature or accession, or at any time thereafter, a list of the monuments and institutions for which they desire the protection agreed to in this treaty. The Pan American Union, when notifying the Governments of signatures or accessions, shall also send the list of monuments and institutions mentioned in this article, and shall inform the other Governments of any changes in said list.

The monuments and institutions mentioned in article I shall cease to enjoy the privileges recognized in the present treaty in case they are made use of for military purposes.

The States which do not sign the present treaty on the date it is opened for signature, may sign or adhere to it at any time.

The instruments of accession, as well as those of ratification and denunciation of the present treaty, shall be deposited with the Pan American Union, which shall communicate notice of the act of deposit to the other signatory or acceding States.

IN WITNESS WHEREOF, the Undersigned Plenipotentiaries, after having deposited their full powers found to be in due and proper form, sign this treaty on behalf of their respective governments, and affix thereto their seals, on the dates appearing opposite their signatures.

For the Argentine Republic: FELIPE A. ESPIL

For the Dominican Republic: RAF. BRACHE

For Haiti: A. BLANCHET

For the United States of America: HENRY A. WALLACE

AND WHEREAS the said Treaty has been duly ratified by the United States of America, whose instrument of ratification was deposited with the Pan American Union on July 13, 1935;

AND WHEREAS the said Treaty has been duly ratified also by the Republic of Cuba, whose instrument of ratification was deposited with the Pan American Union on August 26, 1935;

IN TESTIMONY WHEREOF, I have caused the Seal of the United States of America to be hereunto affixed.

DONE at the city of Washington this twenty-fifth day of October in the year of our Lord one thousand nine hundred and thirty-five, and of the Independence of the United States of America the one hundred and sixtieth.

By the President:
CORDELL HULL
Secretary of State.